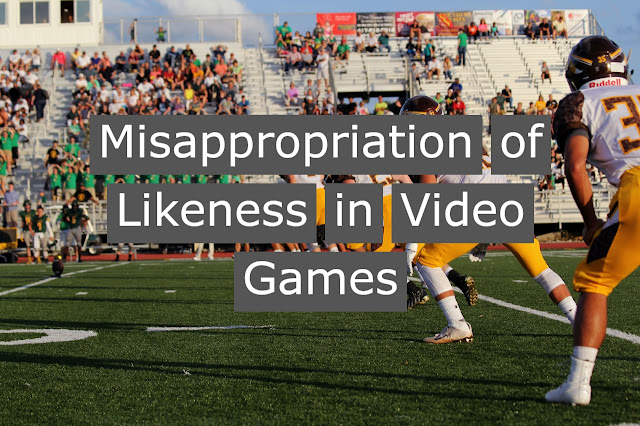 With the recent announcement that EA will be venturing back into the world of college sports for one of their upcoming games. It is essential to look at the reasons for its (over a decade-long) hiatus from making college sports games. Several high-profile cases took down a very profitable area of sports gaming almost ten years ago, over a simple but crucial element to the games, the players.

Privacy and personality laws in the United States is an emerging area of law founded on the basis that is based in tort law. It deals with the ideas that a person has rights:

2. To not have public disclosure of private facts;

3. To not be depicted in a false light; and

4. To not have your name and likeness misappropriated.

On these critical tenets, personality laws have become increasingly more prevalent as, due to advances in technologies, it is becoming easier for one's likeness to be copied and distributed.

This became a highly publicized issue when the actor Crispin Glover filed a lawsuit against the studio behind Back to the Future Part II for the unauthorized use of his likeness and use of footage of him. Without being paid or even knowing he was in the movie, the actor found himself a significant character in the film, so he sued and eventually settled his case against the studio. Naturally, over the years as graphics in video games became better, this law has now seen a rise in claims for unauthorized use in video games.

Lindsay Lohan famously sued the video game makers, Rockstar over an inclusion of a character which seemingly used her likeness in the game 'Grand Theft Auto V', but was ultimately unsuccessful as the Court did not believe the character was, in fact, modelled on Ms Lohan. But despite this, there was one practical part from this case, the New York State Court of Appeals, did determine that a person's computer-rendered image could constitute as a portrait if it were detailed enough. Unfortunately, in Ms Lohan's case, it was found that the image was of a 'stereotypical beach-going female in her 20's rather than Ms Lohan personally.

However, this action did take flight and become a much larger issue in the world of college sports games where athletes found themselves appearing in sports games without getting paid for the appearance. Specifically, these issues arose over college sports athletes' incidents over professional athletes as college athletes were not allowed to be paid for their sporting careers while still in college.

This concept splits into two potential actions depending on an applicant's level of celebrity/commercialization of their likeness. For the average joe, who has no need/history of commercializing the most likely suit that you would have against a publisher would be a misappropriation of likeness, you would also need to establish that you had suffered emotional harm. For a celebrity who trades off their likeness, there is another action in the right to publicity, which is very similar to copyright law.

The idea of misappropriation of likeness was looked at in Keller v. Electronic Arts Inc, where a 9th Circuit Court judgment found that through using a test which looked at the alleged use of a person's likeness as 'intellectual property', whether there was a substantial transformation of the use of the applicant's likeness or whether there were insufficient transformation and the appearance of the applicant in the video game was straight up infringement. Although the players' names were not used, a number of other identifying features were used, including positions, jersey numbers, height, weight etc. For the Court, these features combined ruled out that the players on the team were random fictional characters and were in fact representations of real players on the college sports teams.

This was also explored in White v. Samsung, where an advertisement of a 'Wheel of Fortune' -like scene used a robot that was deemed to be misappropriating Vanna White's appearance due to her renown in that role.

But what about First Amendment rights for the publishers?

Generally, there is a first amendment defence available to publishers who use a person's likeness even though video games would be classified as commercial projects. Provided they are transformative, in some way regarding the likeness. This was put to the test when Panamanian dictator Manuel Noriega took publisher Activision to Court over his portrayal in 'Call of Duty: Black Ops II'. The Californian Superior Court ultimately dismissed this case as it held that the portrayal was sufficiently transformative and only one aspect of the grander creation.

So how and where do you find the difference between the portrayal of a murderous dictator and that of unpaid college athletes? Well, to put it simply, in the essence of the characters. Activision put more time and effort into crafting the character and storyline so that it was a clear work of fiction. In contrast, the recreation of the players based on stats and features in real life does not constitute transformative action.

In the Keller case and O'Bannon v NCAA and Davis v NCAA, the courts held that players' literal recreations are not transformative, even if there were other creative elements intertwined. Further, as the games were valued due to the realism, the players' recreations were instrumental to the making of the product. Accordingly, following these cases, EA paused the production of its games until it could find out a solution between paying the student-athletes and not violating the NCAA rules.

So as EA has announced a return to college-based sports video games, it raises the question exactly how they intend on getting over the hurdle. If you have an audience that seeks out the video game due to its realism, but its authenticity being the thing that gets it into trouble, how exactly can these be balanced against each other?

It is becoming increasingly important for individuals such as the student-athletes to look after your likeness and protect your intellectual property rights concerning them. When a photo is taken of someone in public, it doesn't cross many people's minds that this image could be rendered into a video game character, and someone else could be profiting off your appearance.