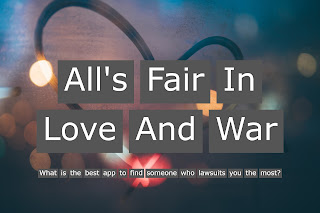 Match Group, the owner of the wildly successful 'Tinder', has declared war on yet another dating app for patent-infringement, alleging that the Muslim-focused 'Muzmatch' has copied the feel of the app, the color scheme and even the naming convention of the app as well.

So how will the Courts decide this? Only time will tell. Courts have been increasingly strict concerning patenting for apps and a patent for internet-related items.

As a brief summary, a patent is essentially a document that shows ownership of an invention. At its core, you must have created or written down the invention to have a patent on it. This changed somewhat in the early days of the internet, where patents were being awarded to ideas that incorporated the use of the internet. Using the internet, this essentially 'covered the base' of requiring an idea to be invented.

However, more recently, in Alice Corp v CLS Bank International, the Supreme Court held that merely taking an abstract idea and proposing to use it on the internet wasn't patentable anymore. So what patent is Match alleging is infringed? It's 'swipe to match' feature, so the courts will decide whether or not the patent was infringed if this continues to trial. It's a risky move for Match, and the court could also find that the patent is outdated and should be invalidated.

This isn't the first time that Match has made these allegations as well. Match has gone after many similar dating apps alleging the same patentable feature. Most notably, last year, when Match came head to head Bumble. Bumble and Match are dating apps with a messy history; if they had to select their relationship status, it would be set to 'it's complicated.

Tinder was the first of the two to be invented, and Bumble was created due to a situation that arose at the Tinder headquarters. Whitney Herd, the founder of Bumble, broke up with her boyfriend, who was her boss and the co-founder of Tinder and, after doing so, sued the company alleging sexual harassment. This lawsuit eventually settled outside of court, and then Ms Herd went on to start Bumble. In the years that followed, Match reportedly tried to buy Bumble twice and both times been rejected and launched a substantial intellectual property lawsuit against Bumble, which essentially accused Bumble of almost every type of intellectual property infringement that existed.

This then led to a countersuit from Bumble against Match for $400 million, claiming that Match had deliberately hurt the value of the company for personal reasons.

Ultimately these cases were dropped/settled out of court; however, it did bring awareness of the high-pressure of patentability that developers face and the tightrope-style walking that developers need to do to avoid litigation for seemingly harmless ideas actually heavily patented.

But it isn't just dating apps that are susceptible to this. Just last year, TikTok was sued by another app, Triller, for using software that allows users to shoot multiple videos and sync them to an audio track.

Despite the above, case law has indicated that we are getting closer much more reasonable standard of intellectual property rights, more akin to the ruling of the Supreme Court with individuals and companies being less likely to unnecessarily pursue these matters without cause.

Which is a good thing as the previous interpretation using overly broad patent protections were terrible for competition and were stifling the marketplace and development of new technology. It has also provided some more protection to small businesses against patent trolls looking for an easy dollar.