Well, It's About Damn Time 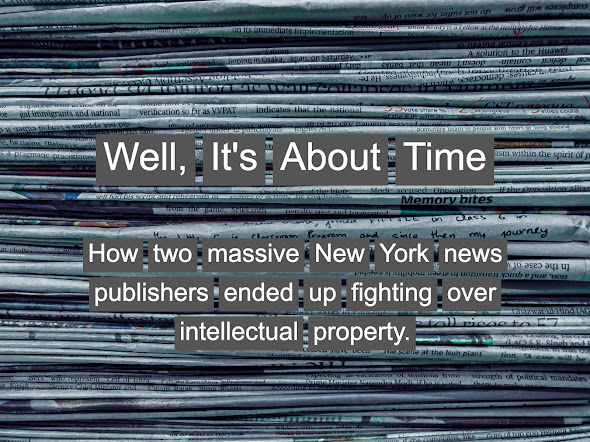 Well, It's About Damn Time

On 20 November 2020, two of the largest most influential media organisations on the planet locked horns over their rights to the thing which Gollum so eloquently put as, 'the thing that devours all things, or for those that are not as up to date on their Lord of the Rings trivia, 'Time'.

As fancy bathrooms are no longer exclusively stacked with copies of the magazine, earlier this year, Time magazine diversified their offering. It unveiled a new short-form online interview series called 'TIME100 Talks' which featured online interviews with journalists, talents and thought leaders. As the videos became popular, Time magazine began to branch out with this brand, establishing Time Talks for dedicated topics like health. Accordingly, they applied to have the trademark 'TIME100 Talks' registered with the United States Patents and Trademarks Office (USPTO). As of the date of this writing, the status of this application is still 'pending'.

This success then attracted the ire of the New York Times, whose holding company has a registered trademark for the words' Times Talks'. The company, arguably most famous for its crosswords or angering the President, decided then to commence proceedings against Time magazine for trademark infringement.

The main arguments that the courts will need to decide is whether TIME100 Talks is an infringement of 'Time Talks' or an extension of the trademark, 'TIME100'.

It is a surprise that it has taken this long for the companies to meet regarding trademark infringement as the New York Times has been around since 1851 and Time magazine was first published in 1923. Since the commencement of both publications, they have both relied heavily on their marketing of the word 'time'.

But what will happen if two established companies with consistent branding and registered trademarks go toe-to-toe in the boxing ring of justice? Well, most likely, not too much, as there is too much at stake. Generic usage of a trademark is the killer of all brands and one of the biggest threats to a company's intellectual property. Since 1788, the word Times has been used in relation to newspapers and the reporting of the news. It is one of the default placeholder names for a newspaper or publication with the location of the publication often preceding the word. In fact, Times began being used by newspapers in England before making it to New York, so it may be argued that it was always in common usage.

Accordingly, if this were ever to make it to trial, both parties are at risk of having their registered trademarks cancelled if the court determines that it has fallen into generic usage. Going the way of the 'flip-phone', originally a Motorola trademark, when a trademark loses its distinguishing nature, it can often lead to an abandonment of the product/brand itself. Although this is admittedly, unlikely given the circumstances surrounding this matter, it is always worth considering.

With this case, we will see soon whether the court determines that there is enough evidence to proceed to trial and whether each parties' trademarks are at risk.