SUPERSIZE THE MCDAMAGES: Hungry Jacks vs McDonalds in the Trademark Showdown 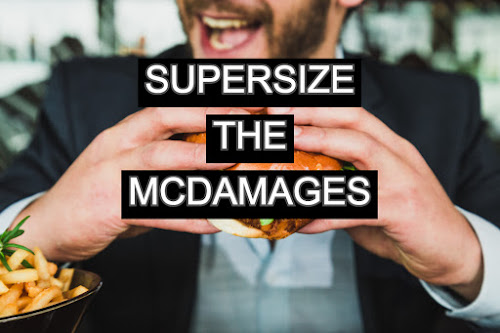 You may have seen in the news of McDonald's commencing proceedings against Hungry Jacks of the Big Jack burger. Aside from the quite frankly hilarious headlines, the actual implications of this matter in the Australian hospitality industry where burgers are king could change the scope of what is legally enforceable for intellectual property rights.

For a while, McDonald's was king of all fast food. The golden arches were synonymous with deliciousness, and for many of us, a purchase at McDonald's was at least a weekly occurrence. We were all very content incorporating McDonald's into our lives and the other fast-food chains stayed silent, terrified of saying McDonald's out loud three times just in case, like Beetlejuice, it appeared on their doorstep. However, almost at an instant, things changed, and we began to shift away from fries and closer to kale smoothies. The market became fractured, and the dominance of the McDonalds became less of public knowledge. But despite all this, one of the significant staying points of McDonald's remained, the authority of the Big Mac.

The Big Mac is the king of all burgers. This has never not been the case, it is the greatest thing since sliced bread, and in fact, I have heard rumours that even in the times when sliced bread was the most incredible thing, it was only invented for that middle layer of the Big Mac.

It should come as no surprise that due to its dominance, the Big Mac has been remade in almost every burger place in the world, it can be reinvented as a sauce, as lettuce leaf, even as a cake but it is still clear what that burger is. McDonald's is very aware of this, as well. That is why you will see a photo of one every time you go to their stores, they know what you want, what you are there for and they are happy to remind you.

But what is the value of the Big Mac? It isn't the recipe, unlike the Flaming Homer from The Simpsons, the ingredients of a Big Mac are pretty well known, 'two all-beef patties, special sauce, lettuce, cheese, pickles, onions on a sesame seed bun'. For McDonald's, the value is in the name, or more specifically, the trademark.

McDonald's has an extensive history of protecting its intellectual property. If you go to Wikipedia, there is an entire page dedicated to lawsuits commenced by them. One thing is exact, they like their trademarks, and they don't tolerate others using them. The Big Mac trademark was registered in 1973, it has been around for a while, and McDonald's renewed this trademark until at least 2028. The Big Jack trademark was filed by Hungry Jacks in late 2019 and accepted in June this year. Shortly, afterwards, they released the Big Jack onto the public.

What happened next was straight, the playbook that McDonald's has adopted countless times before. Presumably a very lengthy cease and desist letter. As said, this is not new. In 2018, Burger Urge received a similar message over their Big Pac burger. To which, a representative from McDonald's said "This is simply a marketing stunt to leverage our well-established and iconic brand. We have no issue with the burger itself; however, the name and promotion are infringing on our trademark by clearly mirroring our famous Big Mac," a McDonald's spokesperson said. But presumably, Hungry Jacks has differed from Burger Urge in their approach to dealing with this, they didn't withdraw their burger.

The issue as to why this is important is what happened one of the last times McDonald's went to court to protect their trademark. In the UK, McDonald's pursued a company over the use of the term 'Mc'. The case went for over 9 years, and the result was the court ruling that McDonald's doesn't own the rights to prefix 'Mc', this was actually repeated in Australia in 2005 to the same result. It should be noted that in between these two cases, in the Philippines, it was found that McDonald's did have rights to the mark 'Mac' used a prefix.

The consequences of this could be dire, if McDonald's is successful, it may lead to a reinvigoration of the McDonald's corporate machine with new trademarks over every trademark possible under the sun, and if Hungry Jacks were to win,  it poses the question what good is a trademark if even the Big Mac isn't safe?

Trademark infringement in fast food restaurants isn't unusual and but more often than not, they resolve themselves before proceedings being commenced.

Only time will tell where this case will end up; however, for now, it is becoming clear that perhaps fried chicken is the safer legal option for dinner.

If you want to find out more about why trademarks could help you protect your business, read this article next!