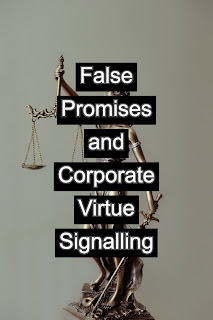 On the dark streets of Gotham one light shines through the darkness, one symbol for apathetic support of issues in search of personal gain, criminals cower… (well at least initially) at the sight of the 'Virtue Signal'.

Virtue signalling has become an ever-increasing issue as we become more and more connected via online platforms. Because of this increased connection, there is a more significant amount of pressure on people to have something to say resulting in a churn of meaningless and self-serving support of issues which never amount to more than a Facebook post. This has been copied in the business world as well as companies realised quite quickly that there is a financial benefit to having your brand being associated with supporting an issue. Mind you, not actually doing something about the issue but merely being associated with doing something and there is a clearcut difference between the two.

In this day and age of increased competition in almost every single market, having customer recognise that your brand of water supports communities in the third world can give you the much-needed edge over the competition. But once again, the value is in recognition of being associated; it does not increase when the company actually takes steps to solve the issue. So it has become relatively easy for companies to claim that an issue is important to their corporate profile however similar to when your friends on Facebook announce that saving the rainforests is their latest passion, there haven't been many times when someone has actually held company's accountable to it. This has changed.

The Federal Court of Australia has recently decided in Australian Competition and Consumer Commission v Oscar Wylee Pty Ltd [2020] FCA 1340 that if a company engages in behaviour similar to virtue signalling and where if they promise action, they can and will be held liable to that action.

But firstly, what exactly is virtue signalling?

What is Virtue Signalling

First used to reference people who post online about issues and how it makes them feel in an attempt to garner attention, the phrase has now come to mean making a statement because you reckon it will garner approval, rather than because you actually believe it. It is a severe form of vanity that pretends to have conviction.

This has become more apparent in the corporate setting as businesses attempt to have their brands be associated with the most popular issues. As people become more aware of companies' impact on the environment, they want to do business with companies that reflect their values. 'Shopping with your conscience' allows companies to have a wider reach and form deeper connections with their customers. It's also a good PR move to overcome any negative information about your company as well, but that's an argument for another day.

But what happened in this case?

From 2014 to 2018, the glasses retailer, Oscar Wylee advertised a promotion where for every pair of glasses bought at their store, Oscar Wylee would donate a pair of glasses to 'someone in need'. The deal became a central marketing point for Oscar Wyle, and this scheme and their subsequent 'relationship' with a charity that focussed on eye health were heavily advertised over their website.

However, when the ACCC actually went to check the books on this claim, they found that Oscar Wylee had failed in this promise and had since the promotion had begun, sold 328,010 pairs of glasses and merely donated the equivalent of 3,181 pairs of glasses. One of these donations was 1000 pairs of frames without lenses in them.

After inspection, the Court determined that Oscar Wylee had engaged in misleading or deceptive conduct, in contravention of s 18 of the Australian Consumer Law (ACL). It had been involved in conduct that was liable to mislead the public as to the number of goods being donated, which was in contravention of s 33 of the ACL. In other words, by telling people that they were donating glasses, Oscar Wylee had managed to profit off the good publicity for doing this act without actually having to do it.

What are the main takeaways?

The main takeaways are that if you are a business and you claim to do philanthropic work, make sure that you actually do it or make sure that you do not claim that you do actual work, just that you care. It seems like the ACCC won't go after you if you do put in the same amount of effort as the rest of us and just change your profile picture.